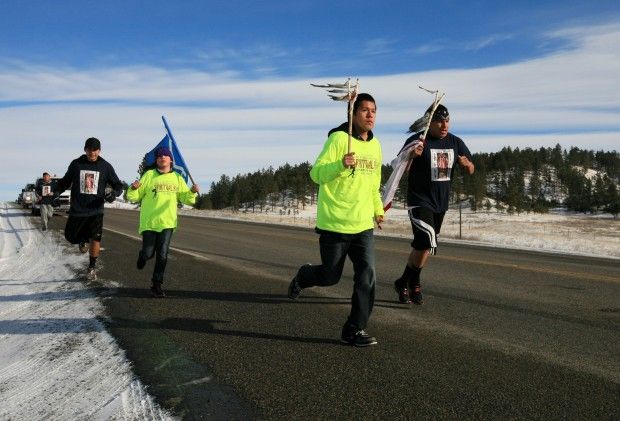 2 hours ago  •  By LORNA THACKERAY/Billings Gazette
The few Northern Cheyenne who survived the Jan. 9, 1879, breakout from Fort Robinson, Neb., had nowhere to turn for help overcoming their nightmare of death and pursuit.

Their wounded psyches passed the pain from one generation to the next, even after the government — under pressure from the public — finally established a reservation in their homeland in 1884.

“Today we want to start the shift and stop recycling the effects of oppression and trauma,” Phillip Whiteman Jr. said Monday as children — descendants of those survivors — ran the last leg of a 400-mile journey following the footsteps of the Fort Robinson survivors.

It is the 17th time the tribe’s children volunteered to retrace the terrible journey from a frontier Army post in the northwest corner of Nebraska to Busby, where remains of some of the Fort Robinson victims were repatriated in 1993 after more than 100 years of storage in scientific institutions in the East.

Whiteman and the late LaForce Lee Lonebear organized the original run as tribute to their ancestors and as a way to heal new generations of Cheyenne. The run also honors Lonebear, who died last year.

The children’s trek through history began in Nebraska at 10:30 p.m. on Jan. 9 — about the same time 133 desperate and starving members of Dull Knife’s band tried to escape brutal confinement in a barrack at Fort Robinson. Most were women, children and old men.

“It was 20 below and they didn’t have more than a blanket or two,” said Wilbur Spang, who accompanied the children to Nebraska and back again. He is the head of maintenance for Lame Deer schools.

He and 130 volunteers and schoolchildren made the journey — about the same number who tried to escape in that bitter winter of long ago, Whiteman noted.

Taking five days of homework with them, Northern Cheyenne students from Lame Deer, Colstrip and St. Labre Indian School boarded a bus and a caravan of vans for the journey into their past. They were joined by students from as far away as Helena. Among them were Crow, Cree and Assiniboine Sioux who had their own histories of trauma at the end of the buffalo days.

The non-Indian community is beginning to understand his people’s need for healing in the aftermath of recent mass killings at Aurora, Colo., and Newtown, Conn., he said.

Participants in the Fort Robinson Outbreak Spiritual Run painted their faces at the beginning of their run in a redressing ceremony to bring them out of mourning, Whiteman said. The journey was divided into short segments. A boy, representing a warrior, carried the sacred staff of prayer. At his side one of the girls ran holding the blue and white Northern Cheyenne flag.

Across a landscape their ancestors knew well, participants ran at a pace of about 7 mph. They must have felt a closer kinship to their ancestors’ hardship as they entered the Black Hills, where ice coated the roads and a full-on blizzard made it hard to see the runner alongside.

“The older children held the hands of the younger ones. That was so good to see,” said Kyle Spang, who signed on as a chaperone. One of her children, Tamia Two Moons, was making her fourth run. Two others, Asia, 8, and Destynee, 9, were also running this year.

Sierra Simpson, 12, decided to take on the run after her father told her about it.

“It helped me learn more about my people,” the Colstrip Middle School seventh-grader said.

She is a descendant of Dull Knife, and she thoroughly enjoyed the six-day history lesson.

The Northern Cheyenne and their Sioux allies were pursued across Montana in the aftermath of their June 25, 1876, victory at Little Bighorn. In November of that year, the Northern Cheyenne were routed in a dawn attack on their camp on the North Fork of the Powder River in Wyoming. Most escaped capture, but 173 lodges were destroyed and 500 ponies captured.

The Cheyenne were left facing a winter with no shelter or supplies. They surrendered in the spring of 1877 and were forced to join the Southern Cheyenne on a barren reservation in Oklahoma. Their numbers were whittled away by starvation and cholera.

In September 1878, Chiefs Little Wolf and Dull Knife had enough. They escaped the Oklahoma reservation with 300 to 350 people. Somewhere along the Platte River the two chiefs and their people split. Little Wolf stayed in the Sand Hills of Nebraska for the winter, intending eventually to head north to his homeland.

Dull Knife planned to join his friend Sioux Chief Red Cloud at an agency near Fort Robinson, but the agency was closed and Red Cloud was at the Pine Ridge Reservation.

Soldiers stumbled on Dull Knife’s band. Dull Knife surrendered and he and his people were taken to Fort Robinson. The government wanted to send them back to Oklahoma, but the Cheyenne said they would rather die.

When they refused to return, they lost all freedom to roam in and around the fort. They were confined to a barrack without heat, food or water for several days before deciding to escape. Most were killed or recaptured, but Dull Knife escaped with a few others. They made an 18-day flight to Pine Ridge, where they were allowed to stay until 1884.