Morgan Krakow: On Rivers and Holidays 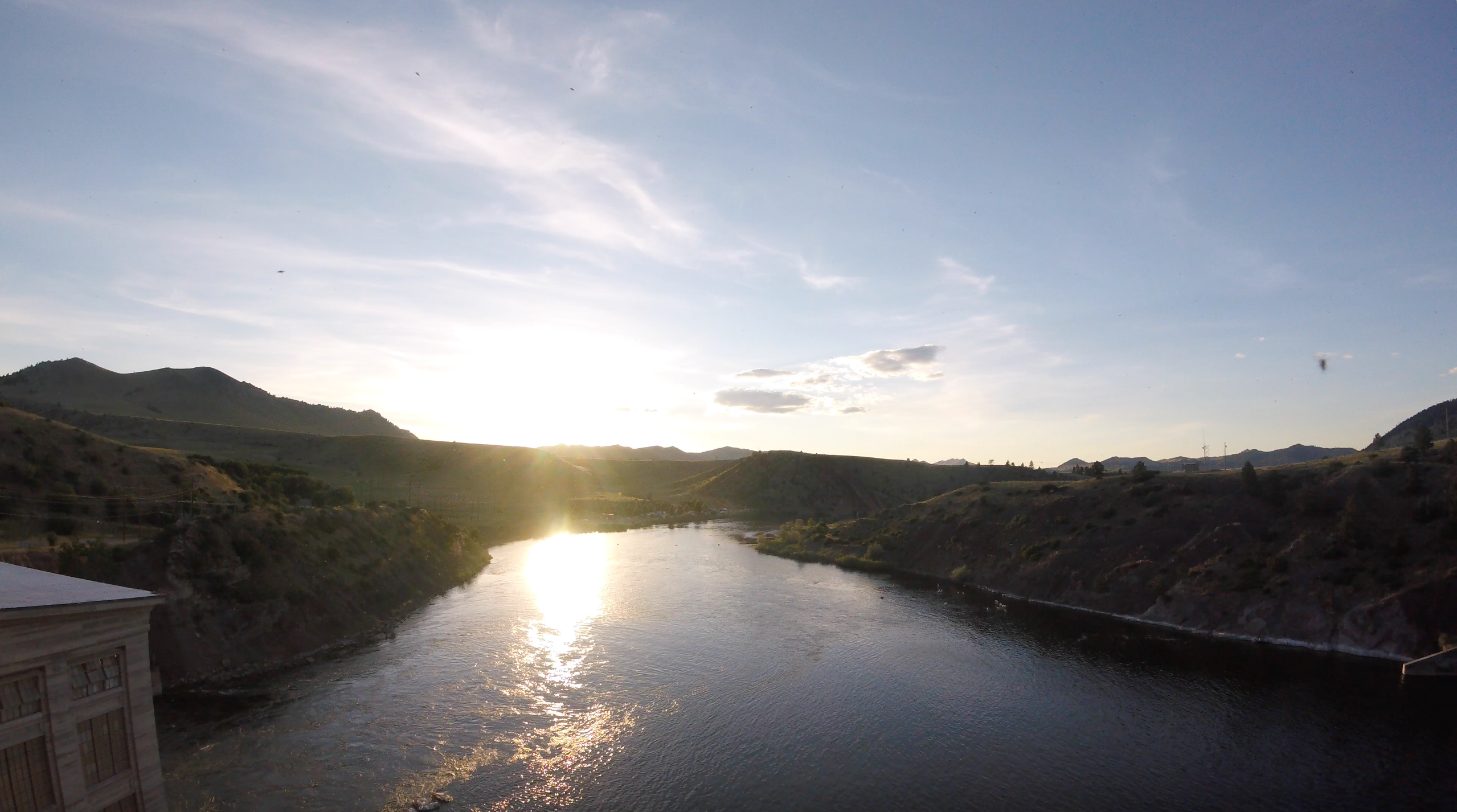 Rivers and holidays are hopeful. They’re both loud and big. They draw attention and glee, and on American soil, they represent a proud history. Just as the Missouri River meanders through the continent — its headwaters in Montana so vastly different than where it meets the Mississippi in St. Louis – The Fourth of July too ebbs and shifts depending on who and where it’s celebrated.

On this past Fourth of July, our wheels turned into Dupuyer, Montana, population: 86. The town approached after a long stretch of hills and watching the Rocky Mountain Front come into view. We had spent the last week understanding policy, voting and the advocacy side of energy in Helena. We met with journalists, lawyers and government workers all putting in time for a sustainable future.

After leaving the capital, we turned toward the Missouri River and camped at its banks and beside Holter dam, cycling its length at sunset. We watched the algal side turn golden as the evening’s fading light dipped and the mountains turned a deep purple.

Around the fourth of July last year I also spent some time at the banks of the Missouri River. It was muddier, dirtier, lacked the jolly fly fishers and horses across the way. I wasn’t frying up camp stove falafels or nursing the tail-end of a shoulder singe. And I was not very close to the headwaters. Rather, I was states and miles away, close to the end of the Missouri, in my hometown of Kansas City.

On this year’s American Birthday, I’ve found myself reflecting on the role I play as a citizen. Just in the last week we had witnessed democracy in the making. We came to understand the crucial roles of the Department of Environmental Quality. We learned how journalists like Hal Herring can change minds and only report the truth.

From the banks of one side of the Missouri to the other, 12 months have passed and I’ve continually reassessed my personal citizenship. I have found myself asking what it means to be an American and how I fit into the complex mix of individuals who make up the country. I spent much of the last year feeling embarrassed and disappointed in the nation. But it would be a stretch to say that these feelings were only from a vulgar election cycle.

As I finished my second year of college I took the time to study the nation from a variety of perspectives and viewpoints. As the immigration ban occurred, I was in a class on development in the Middle East and learned from my peers what it was like to feel fear about visas being revoked, or the cold uncertainty of not knowing if it would be possible to return home.

I spent time in a class on American nationalism, reading history books from different eras that veiled slavery and violence against Native American populations as small unmentionable blips that might tarnish an otherwise pristine historical record. In the last 12 months, I have read more than I have in the rest of my life. As my friends were out marching and protesting, echoing off of each other, I was reading and writing – soaking in the absurdity of rhetoric and trying to contextualize the present day with the historical American past.

After all of the months spent researching and contemplating, I felt bad about the country on my passport. It felt like democracy had broken – that people were more interested in flinging Internet insults, in telling me that my academic setting was too politically correct and sheltered, that xenophobia and bigotry had scored both free throws at the end of the second half. It felt like things were failing.

And then I got on a bike in Montana. I hesitate to brand this trip as a cure-all for my patriotic problems. We’ve witnessed incredible oversights when it comes to both people and pollution. We have come face-to-face with those who disregard climate change theories in favor of a less scientific approach. We’ve experienced the strangest and most sexist of side comments about women on a long bike trip. America has reared its underbelly all along our route, harassing words from R.V. drivers and the effects of an oil spill along the Yellowstone River won’t leave my brain anytime soon.

But something about the landscape, the way a bike flies down a pass, the way we cook and eat together, respectfully disagreeing and engaging with all those whom we come in contact with – it makes me feel proud to be in such a big country. We have beautiful places but we also have beautiful people and ideas, despite the present’s nasty tone. And local government is still functions. City council meetings are still happening every week. NGO’s are playing the crucial role of oversight and ordinary citizens are making their own efforts, from organic farming to organizing neighbors against coal companies.

I just needed to get out of my filter bubble, turn off my notifications and actually start talking to folks in America to start believing in my citizenship. I understand the terrifying and disgusting past that this nation has often engaged with, but that understanding has propelled me further to help change, shift and write about these places for the greater good.

I wasn’t ever much of a flag waver, and fireworks make me nervous, but on this fourth of July, while I didn’t necessarily feel a sense of incredible pride, I held a better sense of where I stand on this Earth and where I stand in this country. In a few weeks I’ll be back at a more familiar stretch of the Missouri, much closer to where it meets up with the Mississippi. I won’t be near to the Rockies anymore. I will still hold onto the complexity and scope of this country, just the way a river can flow and change as it runs through so many places, so can the people and individuals who live along it. Just as rivers and mountains, the nation is not a static place.

As someone who had never gone on a backpacking trip, I enjoyed the new perspectives, skill and relationships that I gained. I have an immense feeling of pride in myself and my classmates.